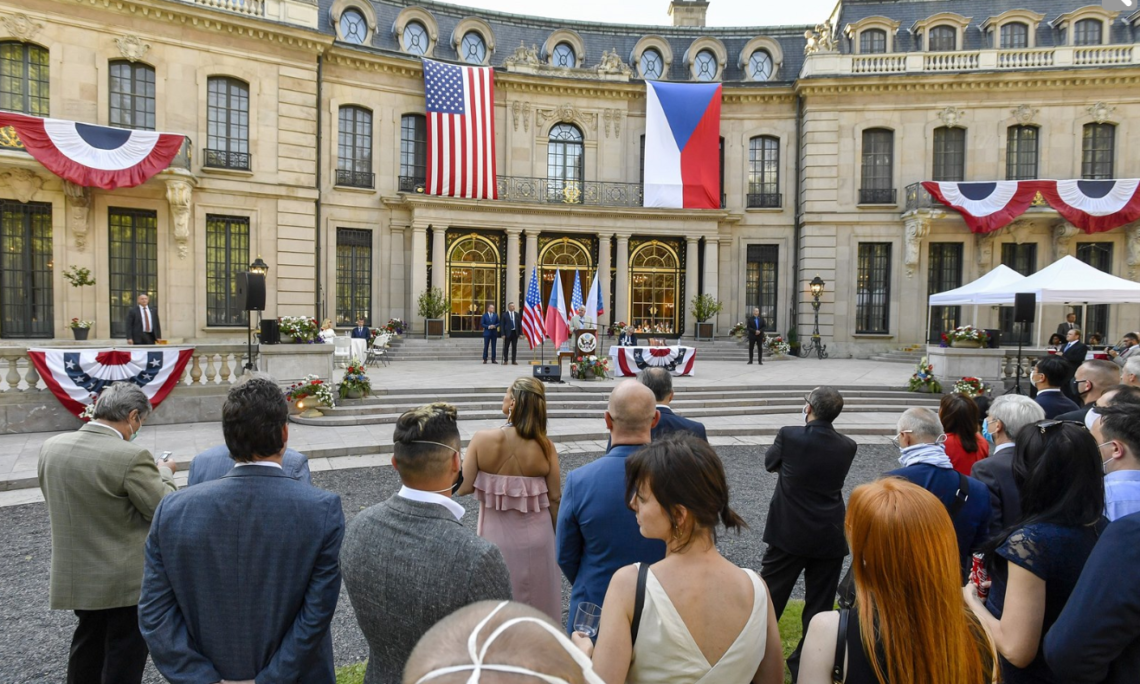 Welcome to our home and thank you for being here.  Vitám Vás Všechny! Karen, I, and our entire embassy family are happy and honored to have you here with us to celebrate the 244th birthday of our nation in the same fashion as millions in the United States will, with a traditional American barbecue.

I must admit that, as I stand here with you, I first and foremost feel thankful.  The past few months have been grueling, and our lives thoroughly disrupted.  Both of our countries, along with the rest of the globe, took extraordinary steps to protect our most vulnerable citizens.  Our lives were upended, our activities paused, and great sacrifices have been made.

However, on this beautiful summer evening in Prague, I feel that the worst is behind us.  We have been coming out strong and resolved.  The rebuilding process has begun.  I commend the Czech government on its handling of the crisis caused by the invisible Coronavirus enemy; you stood united, acted swiftly, and protected all the residents of the Czech Republic, our staff included.  As life starts to unfold again, I feel the optimism in the air, and I know that we can seize this moment to do great things –together!

As every year, we organize this event to remember and honor July 4, 1776.  On that day, our forefathers declared their independence from a colonial empire and gave birth to the United States of America.

I know that Europeans sometimes think of us as a young nation, which comparatively we are, America is the world’s oldest continuous democracy.  In 1776, our founders set down the principles of liberty, self-government, equality, and unity.  Since then, we have continuously strived to further these values.  Even when we disagree, we hold true to these ideas and continue to demand a more perfect union.

When our country was a little over a century old, a great Czech musician crossed the Atlantic and landed in New York City.  The America to which Antonín Dvořák arrived was already a melting pot of people from all over the world, and many parts of the U.S. tapestry were woven by its Czech immigrants.  Like Alexis de Tocqueville and others before him, Dvořák came to us from the Old World to observe, learn, and create.  And what he created, inspired by the already deeply rooted American culture, is a piece known as the “New World Symphony.”

This symphony has been described as one of the greatest orchestral works ever.  It showed America to itself in a new light.  It influenced countless musicians to explore America’s European, African and Caribbean origins, and create jazz, blues and rock’n’roll.  A folk song called “Goin’ Home” made famous by Dvořák’s work was played as the body of our President Franklin Delano Roosevelt was carried to its final resting place in 1945.  This upcoming Saturday, on July 4, 2020, I hope that many of you will turn on your television sets to Česká TV Art at 8pm to watch the Prague Philharmonia perform the “New World Symphony” in this very garden.

As I watched the filming of that concert, I thought not only of Dvořák.  I thought of all the other times in which the bonds between our two nations were forged in critical historic moments.  I thought of June 1918 when President Masaryk came to the White House to ask President Wilson to support the emerging Czechoslovakia.  I thought of the American troops in 1945 helping to liberate the Western Bohemia.  I thought of the bust of Václav Havel in the U.S. Capitol building and the unwavering support that our country extended to yours in 1989 and in the aftermath of the Velvet Revolution.  And I thought of this evening as our chance to honor that bond in this our own challenging times.

When we Americans look at the Czech Republic, we see a tremendous progress in the past 30 years.  Czech ingenuity, entrepreneurial spirit, and commitment to democracy and human rights continue to inspire me every day.  But I also think about the troubling political times you have gone through since the liberation of the Western Bohemia 75 years ago.  So, I hope that when you look at America, you will see an old and staunch ally and friend.  You will see the wisdom of American idealism and appreciate our refusal to succumb to cynicism.  But, most importantly, I hope that you will always see the value of creating and maintaining stable and open democratic institutions, and societies, built on the bedrock principles of freedom and prosperity.