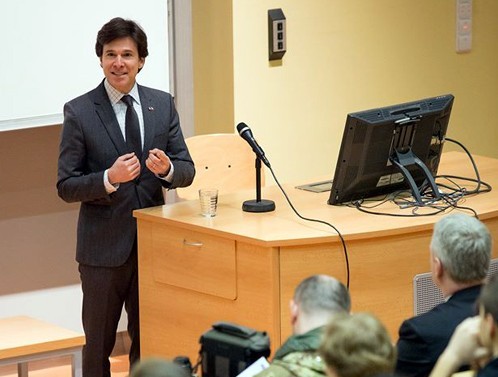 Ambassador Schapiro speaks to the students of the Faculty of Education of J. E. Purkyně University.

On February 26, Ambassador Schapiro continued his regional tour of the Czech Republic, stopping in Ústí nad Labem. He was welcomed by the new political representation at the town hall –Lord Mayor Josef Zikmund and deputies Jana Bohuňková, Martin Hausenblas, and Martin Mata.

Ambassador Schapiro delivered a donation of ten Kindle e-book readers to the Pedagogical Faculty of J. E. Purkyně University, where he also discussed current political issues with the students.

The Ambassador then spoke about regional topics with representatives of the Ústí Community Foundation – a foundation which supports community development and promotes individual and corporate philanthropy in the region of Ústí nad Labem and Děčín. The meeting took place in the neighbourhood of Předlice on the presmises of People in Need, an organization that has implemented programs aiming at improving the lives of inhabitants of this socially excluded location. Representatives of other organizations such as Caritas and Drug-out klub contributed to the discussion as well.

The final stop of the visit was the Cultural Centre in Řehlovice, which, since the 1990s, has implemented cultural exchange programs with Germany in order to cultivate Czech-German relationships.