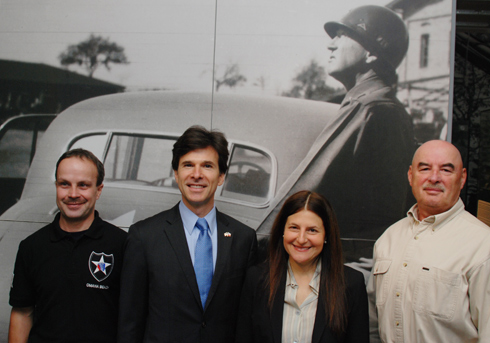 Ambassador Andrew Schapiro visited the Plzensky Region on November 3 in what was his second official trip outside of Prague.  The city of Plzen is often regarded as the most pro-American city in the Czech Republic because it was liberated by General Patton’s Army at the end of World War II, an event commemorated every year in parades, festivals, and memorials to fallen soldiers.

During his trip to Plzen, Ambassador Schapiro visited the Patton Memorialmuseum devoted to that very liberation of west Bohemia, but also visited the Techmania Science Center, where he explored the latest technological developments in robotics, and met with students of the University of West Bohemia.

In his meetings with local and regional government officials, the Ambassador discussed economic prosperity in the region and possible cooperation. After the meetings he said: “We want to be the partners with the region as closely as we can for economic development, to work on important issues, like good government, and in any other ways we can be helpful.”

At the conclusion of his visit, Ambassador Schapiro discussed with students of the University of West Bohemia current foreign affairs issues and U.S.-Czech bilateral relations. He revealed that as a student himself, he visited Plzeň back in 1982, and described what has changed:

“In some way the best question would be ‘what has not changed,’ because the amount of energy, life, and business development is just so special for me to see; also the university, which I don’t think existed then, is a real source of energy. It’s wonderful to see.”