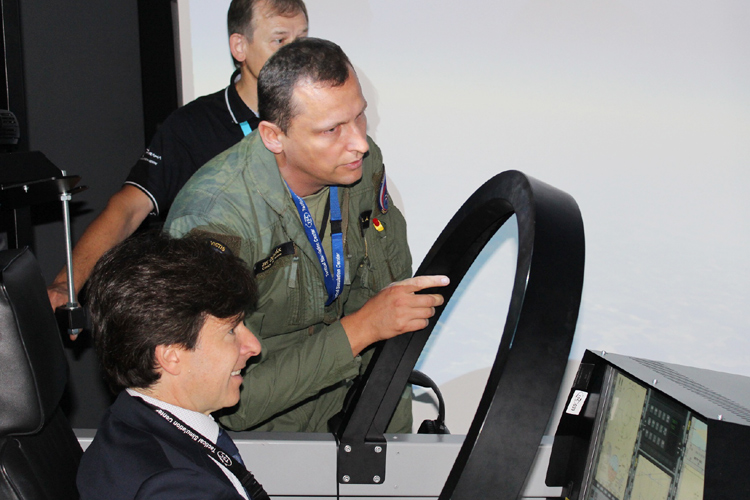 On August 31, U.S. Ambassador to the CR Andrew Schapiro, Czech Ambassador to the U.S. Petr Gandalovic, Deputy Defense Minister Jakub Landovsky and other guests visited the airfield in Pardubice. The main goal of the visit were the joint exercises of our and foreign soldiers that have been taking places at the base. The delegation was welcomed by the advisor to the General Chief of Staff, Brigadier General Jiri Verner.

After a brief introduction of the Caslav Air Base commander, COL Tomanek, there was a presentation of the Flight Training Center, including a demonstration of planning and executing the exercise. Also the guests were invited to try the test. Deputy Defense Minister Landovsky noted: “I had a chance to experience the air simulation works. The soldiers say that they should train in conditions in which they would fight. Actually, I’m not a soldier but have to say that the situation in a cockpit is very close to reality that experience the soldiers in combat.”

Then they followed to the Administration of the Pardubice Airfield. They have learned the structure, its task and activities. The delegation was interested in operations, especially those connected to the series of recent deliveries of unused ammunition to Iraq, and stationing of KC-135 tanker aircraft at the airbase. The questions were answered by the deputy commander, Major Jaroslav Vildman at a presentation at the air traffic control tower.

The program was concluded by a visit to the 14th logistics regiment. The delegation met Czech and American soldiers who are exchanging knowledge from logistics. During aworking lunch, Ambassador Schapiro received a plaque with regiment’s signs from the commander, COL Stanislav Hudecek.

“The diplomats pay attention to the cooperation of the armies. In the U.S., soldiers participate in mutual exercises, last time it was a training of army engineers in Texas, including troops from Bechyne unit. Everyone enjoyed it, there was no language barrier, so I have to say that the mutual cooperation has its benefits,” said Ambassador Gandalovic.

In the end, the U.S. Ambassador to the Czech Republic Andrew Schapiro said: „The National Guard State Partnership Program and cooperative training events with US Army Europe are exemplary parts of the U.S.-Czech partnership. I’m pleased to witness more examples of how training together increases trust and interoperability between Czech and US military service members. These exchanges are key to maintaining and deepening our relationship.”