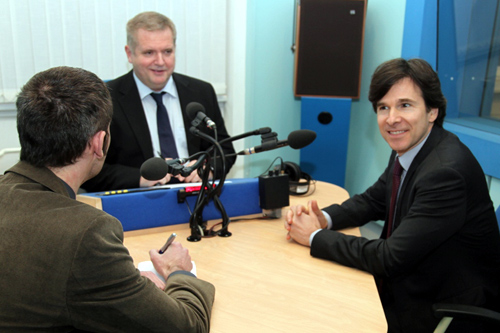 Ambassador Andrew Schapiro speaks to the Czech Radio during his visit to Hradec Králové.

U.S. Ambassador Andrew Schapiro visited Hradec Kralove, the capital of East Bohemia, on January 14. He started his trip at the ZVU POTEZ Company, a large local employer that exports a significant portion of its chemical technology and equipment products to the U.S.

The Ambassador then continued to Bozena Nemcova Gymnasium to discuss with students life in the U.S. and the Czech Republic, and later met with Hradec Kralove Mayor Zdenek Fink, with whom he talked about local and regional issues.

In the afternoon, the Ambassador called on Rector Josef Hynek of University of Hradec Kralove to debate Czech-U.S. cooperation in education, toured the city museum that resides in a magnificent building designed by architect Jan Kotera, and wrapped up his trip with an interview for Czech Radio Hradec Kralove on his life as U.S. Ambassador and Czech-U.S. relations.