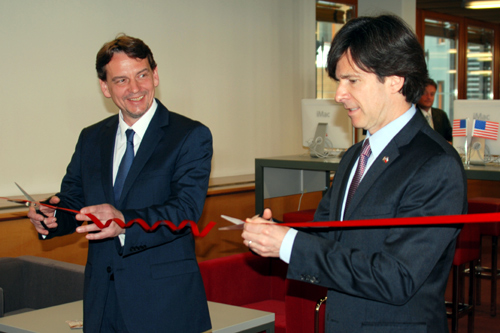 Ambassador Andrew Schapiro visited the South Moravian capital Brno on April 14. He began his visit by opening the renovated American Space called “InfoUSA” at the Moravian Land Library. The event marked the 10th anniversary of the space that currently contains more than 1500 books, magazines and a multimedia collection.

“A principal objective of the U.S. Embassy is expanding people-to-people connections with Czech citizens and institutions outside of Prague. The Moravian Land Library, with the now expanded InfoUSA plays key role,“ said the Ambassador during the ribbon-cutting ceremony.

Mr. Schapiro then continued to Masaryk University, where he met with Rector Mikulas Bek and then talked to several hundred students about U.S. foreign policy, U.S.-Czech relations and his life as U.S. Ambassador to the Czech Republic.

He finished his Brno trip in a modern and environmentally-friendly building of the “Partnership” Foundation, one of the largest Czech foundations focusing on the environment, sustainable transport and community development.