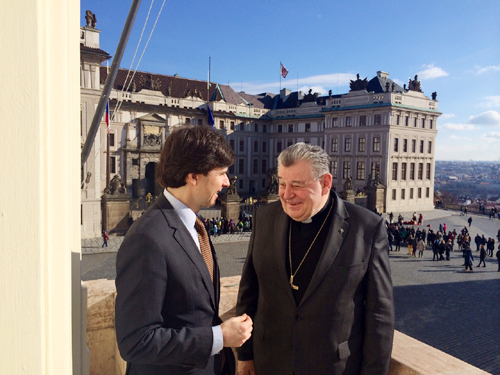 Ambassador Schapiro and Cardinal Dominik Duka, the Archbishop of Prague, on rooftop of the Prague Archdiocese.

Ambassador Andrew Schapiro and Deputy Chief Mission Steve Kashkett paid a courtesy call on Cardinal Dominik Duka, the Archbishop of Prague, on February 3, and had a wide-ranging discussion of issues surrounding church and state in the Czech Republic as well as attitudes among the Czech people towards religious and ethnic minorities. After the meeting, the Cardinal offered a tour of the wonderful ceremonial rooms and rooftop of the Prague Archdiocese.