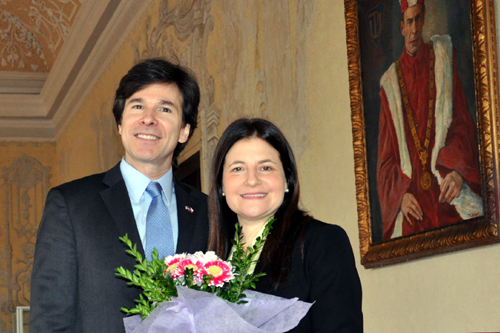 Ambassador Andrew Schapiro and his wife Tamar Newberger in Olomouc.

Ambassador Andrew Schapiro and his wife Tamar Newberger visited Central and North Moravia on February 24 and 25. They started their tour in Olomouc, where they met with Palacky University Rector Jaroslav Miller and debated with university students life and politics in the U.S. and the Czech Republic; after that they visited Olomouc Mayor Antonin Stanek to discuss new possibilities of U.S.-Czech business and cultural cooperation.

The 7th Mechanized Brigade in Hranice came next, and the Ambassador used the opportunity to thank Czech troops stationed there for their great job during deployments in Afghanistan.

The Ambassador then continued to Ostrava – he started his visit in the capital of the Moravian Silesian Region by meeting CEO Jan Svetlik of Vitkovice Machinery Group, and later dined with Roma activists Kumar Vishwanathan and Magdalena Karvayova.

On February 25, Mr. Schapiro met with Regional Governor Miroslav Novak and Mayor of Ostrava Tomas Macura, and then toured with his wife a modern campus of Technical University Ostrava, which included a meeting with Rector Ivo Vondrak, a visit of IT4Innovations with its supercomputing center, and lunch with the university’s International Visitors Leadership Program (IVLP) alumni.

In the afternoon, the Ambassador toured the “Vesnicka souziti” (Coexistence Village) in Ostrava’s neighborhood of Liscina to learn more about this project and to see a good example of how Roma and non-Roma people live successfully side by side.