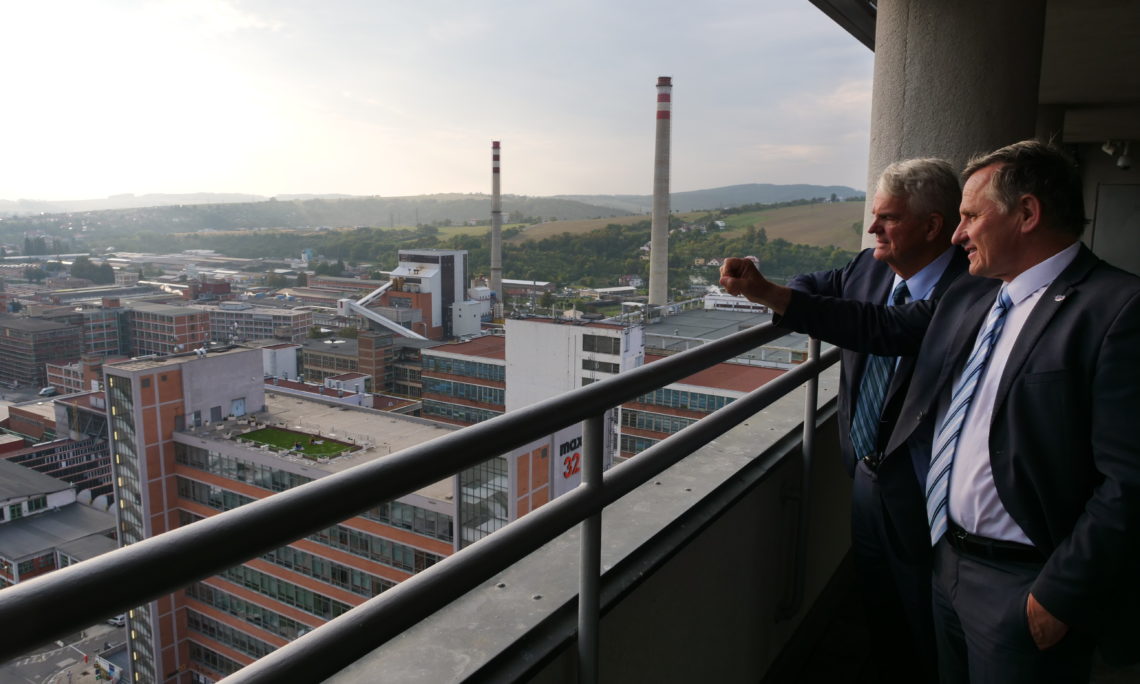 U.S. Ambassador Stephen King, on September 4-5, was pleased to make his first official visit to the southeast Moravian region of Zlin. Ambassador King plans to visit all fourteen regions of the Czech Republic during his tenure, and has instituted an embassy program for diplomats and staff to do the same by regularly traveling “Beyond Prague.” After ten months in office, Ambassador King has already visited six regions of the country. He explained his objective as follows: “It occurs to me that 80 percent of Czechs live outside of greater Prague, and we [Embassy officials] spend too much time in the capital city and not enough time out in the country.” Mr. King believes that the legacy of his three-year term as U.S. Ambassador will be “improving and growing the economic relations between the United States and the Czech Republic.”

At the start of his trip, he met with Governor of the Zlin region, Jiri Cunek. They discussed potential economic cooperation, the general political situation, and also spoke about the 100th anniversary of an independent Czechoslovakia and the centennial of U.S.-Czech bilateral relations. Mr. Cunek invited the Ambassador to view the original office of Tomas Bata, the renowned founder of the Bata shoe company, and showed him the regional capital from the roof of the seat of the regional government, which is known as “Bata’s Skyscraper.” Later, the Mayor of Zlin, Miroslav Adamek, introduced to Ambassador King how legendary Czech entrepreneur Bata planned beyond just his business, and how he positively influenced the development of the city of Zlin and the lives of its residents. Ambassador King found it interesting to learn that Tomas Bata, when building the city and his factory, found inspiration from visits to the USA. In addition, the Ambassador was impressed “by people’s interest in growing and expanding the entrepreneurial spirit that in this area is represented and exhibited by Tomas Bata.”

During a visit to the Center of Polymeric Systems of the Tomas Bata University, the Ambassador was particularly impressed by the research and development the institution has achieved since its establishment only 17 years ago. Ambassador King noted that: “Czech history would tell us that Czechs are famous for their golden hands, but frankly the future of the world, I believe, is in high technology and that is exactly what this university is trying to do.” The Ambassador also appreciated the university’s cooperation with U.S. universities and use of U.S.-made equipment.

Ambassador King concluded his visit to the region in the city of Uhersky Brod, where he appreciated the friendliness of the local people: “I come from the middle of the western part of the United States, so I grew up in a small town. I feel at home here.”