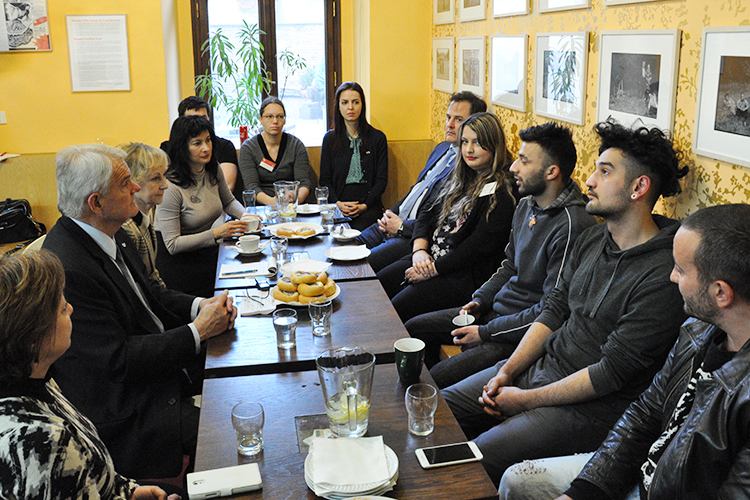 As a part of his mission to engage with the Czech people and learn more about the Czech Republic, Ambassador Stephen King made his first multi-day trip to the country’s second largest city, Brno. During his three day visit, the Ambassador met local technology companies, and spoke to students, civil society activists, and local politicians.

To begin the visit to Brno, he visited the Museum of Romani Culture. Following a tour of the museum’s moving expositions, the Ambassador met with young local Roma activists and discussed the problems and issues they face and their ideas for improving the situation. Ambassador King next visited the Lord Mayor of Brno Petr Vokřál and South Moravian Governor Bohumil Šimek, and discussed the political and economic situation in the region as well as potential cooperation.

During a discussion with students of the School of Social Sciences at Masaryk University, Ambassador King described the Centennial of the U.S.-Czech relations, spoke about U.S. foreign policy, and offered advice to the students about building a career: “Fulfill the promise of what you are good at,” he advised. MuniTV, a university project for student journalists, interviewed the Ambassador. A link to the MuniTV interview is available here (in English) https://youtu.be/NeOo9aMBR4c.

Brno is well known for its excellent technical education and the presence of IT and technology companies, with advanced labs, research centers and production lines. Ambassador King visited the JIC South Moravian Innovation Center in Brno, and noted that “JIC illustrates the power of public-private partnerships. Talented people have opportunities to develop their ideas, supported by the best experts.” “I agree,” he added, “that Brno is a local ‘Silicon Valley’.” Ambassador King also visited a U.S. company – Honeywell – which has laboratories in Brno. In addition, Mr. King met with representatives of the Y-soft company, which invests in the United States and other countries, and affiliated local entrepreneurs.

Finally, the Ambassador visited the Czech National Cyber and Information Security Agency, which has its headquarters in the South-Moravian capital. Ambassador King said that he “was pleased to get a deeper understanding of the NUKIB’s activities in countering cyber threats, and I look forward to helping our two countries develop greater collaboration in this important area.”