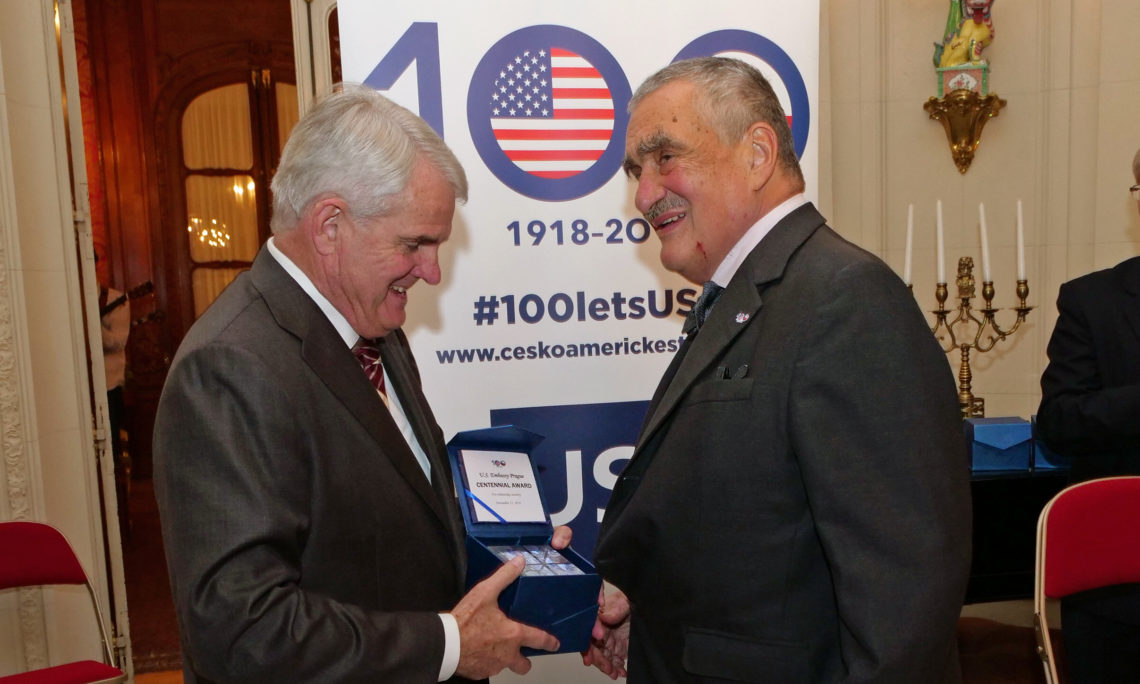 The U.S. Embassy announced the winners of its Centennial Awards during a special Centennial celebration held in the Ambassador’s residence. The three Centennial Awards honor Czech citizens who have made significant contributions to the U.S.-Czech relationship in the areas of enhancing security, promoting collaboration in the cultural and educational spheres, and advancing our commercial and economic ties.

Nominations for Centennial Awards came from U.S. Embassy contacts, staff, and the general public beginning in the summer. Dozens of nominations were carefully reviewed by a diverse selection committee. Ambassador Stephen King selected the winners from a list of three finalists in each award category, recommended by the selection committee. The Centennial Award itself is a beautifully engraved crystal 3D image of the U.S. Embassy’s Glorietta, which has stood as an enduring symbol of hope, freedom and democracy.

The first Centennial Award for enhancing security was presented to former Minister of Foreign Affairs Karel Schwarzenberg, who has worked tirelessly to strengthen ties between the Czech Republic and the United States for multiple decades. He has dedicated his life to fully ground Czechoslovakia and the Czech Republic into the architecture of Western security and economic organizations.

The second Centennial Award for collaboration in culture and education spheres was given to historian and university professor Milada Polisenska, who has made a life-long contribution to Czech-American relations through culture, education, and research. Her book on the history of diplomatic relations between Czechoslovakia and the United States and her research articles place her among the Czech Republic’s finest scholars.

The third Centennial Award for advancing commercial and economic ties was presented to Vaclav Muchna, the founder and CEO of the Y Soft company. Mr. Muchna is a successful Czech businessman and entrepreneur, and a pioneer Czech investor in the United States who is working to nurture other investors in growing their companies in America.