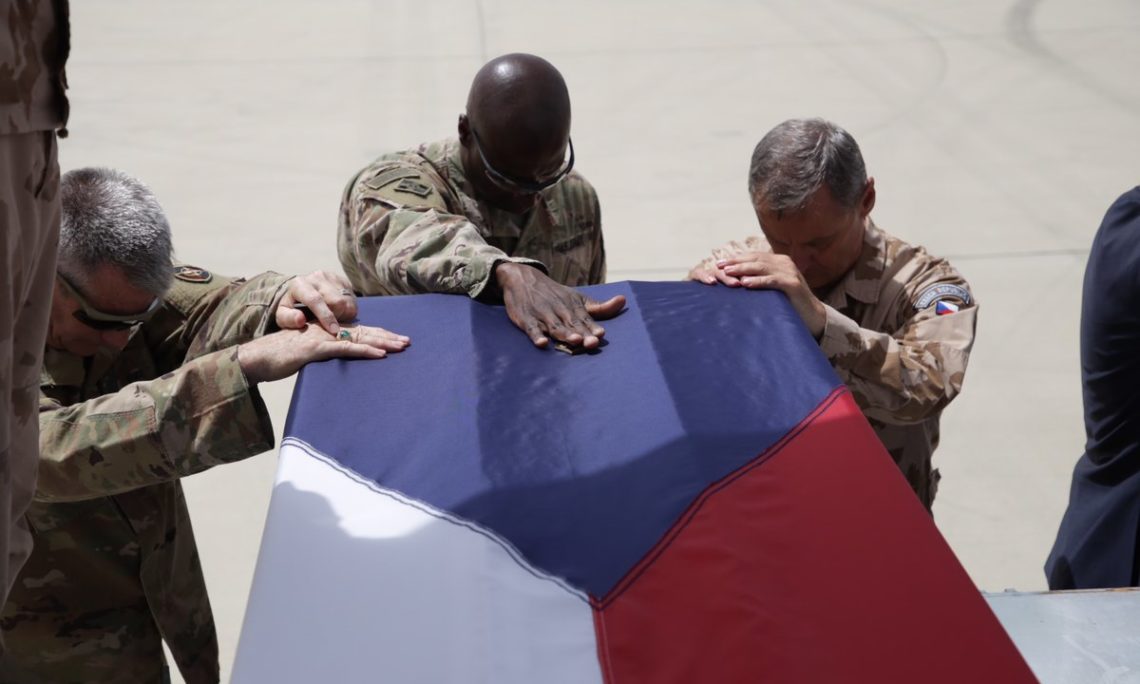 I had the honor this past Wednesday to attend the repatriation ceremony of three Czech heroes at the Prague airport.  This was my first such experience.  I was there not only in my official role as the U.S. Ambassador to the Czech Republic, but also as a grateful father.  My son spent part of this year under the protection of these brave soldiers in Afghanistan.

Two military officers from the U.S. Embassy accompanied me to the ceremony.   I was very moved to see many government officials in attendance.  What was perhaps even more impressive was the presence of so many Czech military personnel, representing every branch and rank.  Regardless of our position in society, however, we were there to pay our respects to these fallen heroes and support the bereaved families.

The specially chartered aircraft arrived on schedule and once its engines were stilled, the heroes, one by one, were lowered to the waiting arms of their military colleagues.  They were home.

The military coffin bearers began their honored movement with the flag-draped coffins and approached the waiting catafalques in front of the families and ourselves.  It was at this moment in time that it struck me.  Certainly, I was there as the official representative of the United States Government, and my nation mourns at the side of our Czech allies.  But, I also felt personally indebted to those soldiers who ensured my son, who spent time at Bagram airbase a couple months ago, slept soundly at night knowing his fellow warriors from the Czech 42nd Mechanized Battalion were standing guard outside to keep him safe from terrorist attack.

But wasn’t I also there as a member of a larger common constituency – a body that represents the best of humanity?  Could it be there were no representatives of political parties all standing there with me, but rather freedom- and liberty-loving people from an allied country who wanted to honor their heroes’ sacrifice on behalf of other freedom-loving people in a foreign land?  That the love of freedom and those who sacrifice to protect it somehow transcends our other societal divisions?

These fallen heroes made the ultimate sacrifice for all who share the values of freedom, liberty, democracy, rule of law, transparency and all the other values we as free people enjoy.  They and the country they represented deserve our highest respect and honor.  So when the Official Band of the Army of the Czech Republic – “Ustredni hudba Armady Ceske Republiky” – began playing the beautiful Czech national anthem, I did something I have never done before.

I always stand at attention and place my right hand over my heart (as do most Americans) whenever our national anthem, the “Star Spangled Banner,” is played.  While at respectful attention when other national anthems are played, I have never placed my hand over my heart as I do for my own country… but I did so on Wednesday at the Prague airport ceremony when “Kde domov můj” played.  I did it instinctively, without thinking, as if I just knew in my heart that these brave men from the Czech Republic gave their lives for all members of this world who love freedom.

The ceremony ended.  Followed by their families, the heroes’ coffins were placed in their hearses and slowly left the field.

I am a man of faith, so when shortly thereafter the skies opened up and the rain accompanied our departure, I could not help but know He joined the families, friends, colleagues and all members of greater humanity in sharing our heroes’ loss.  I know that their legacy will live on as we are all able to come together, regardless of political affiliation or nationality, to honor their sacrifice in defense of freedom for our fellow men.