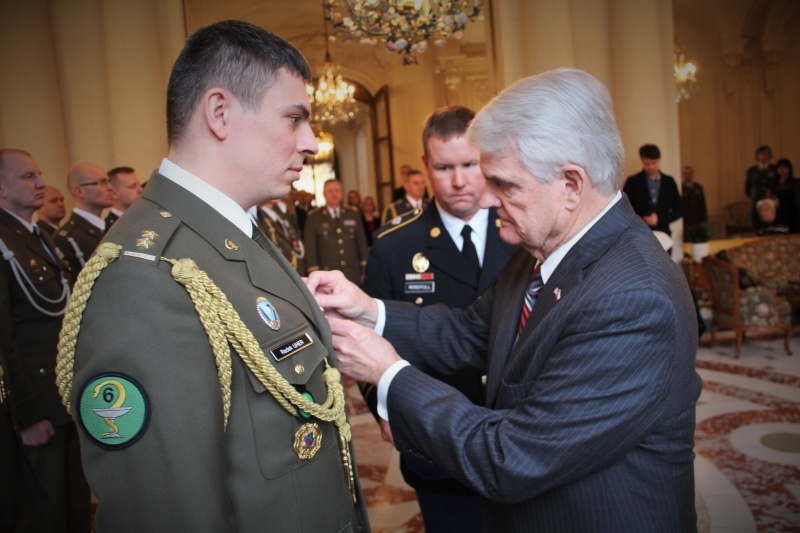 On January 23rd, Ambassador Stephen King decorated 17 members of the Czech military Field Surgical Team. During the first half of 2017, they were embedded with American forces at a base in Iraq’s Anbar Province, approximately 200 km west of Baghdad, very close to the front line at that time. During their deployment, the Czech Field Surgical Team saved roughly 55 lives that not only included Iraqi soldiers wounded in combat, but also Iraqi civilians who were victims of improvised explosive devices planted by ISIL. They also treated severe non-combat related injuries that local health care facilities were incapable of treating.

During the ceremony Ambassador King stated: “This team performed 49 surgeries for traumatically-injured patients and set up a short-notice blood bank program that saved a young Iraqi boy’s life. They were also the most admired medical team by Americans serving at the same location. Major General Joseph Martin – the Commanding General responsible for all coalition forces in the area around Baghdad — named one member of this team as his ‘hero of the week.’ Another member received a Commander’s coin for their leadership.”

Czech surgeons worked side by side with medical experts from the United States, United Kingdom, and Denmark. In addition to their life saving work already mentioned, they provided training to local health care experts to help Iraqis take care of their own people.

Ambassador King concluded: “As we carry on into 2018 we should celebrate moments like this, and remember this very special bilateral relationship. We are not only fellow NATO Allies, but friends with 100 years of foundation to build upon.”

Among the decorated soldiers was included also Czech Major General Jiri Verner, who received the Legion of Merit medal with a personal dedication from U.S. Defense Secretary James Mattis. The Major General served as Defense Attaché at the Czech Embassy in Washington, D.C. from 2013 to 2016.