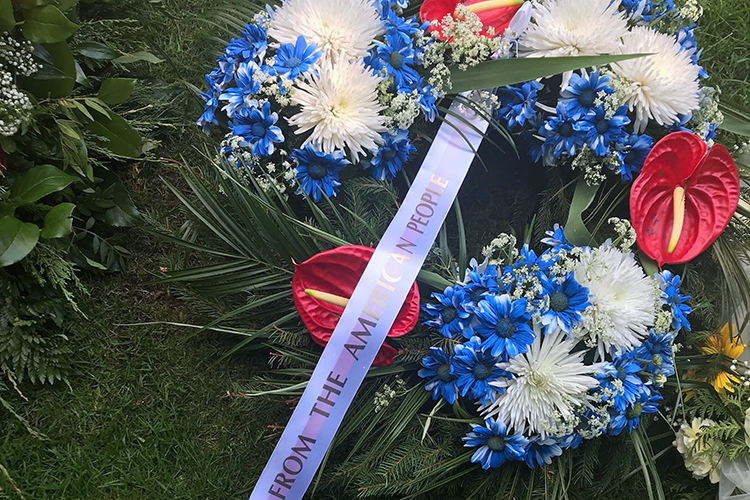 On Sunday, May 13, U.S. Ambassador Stephen King attended the annual commemoration ceremony for the Romani victims of Nazism at the Lety Memorial. The gathering is traditionally organized by the Committee for the Redress of the Roma Holocaust in the Czech Republic (VPORH), which brings together former prisoners of Nazi concentration camps who are Romani, and their relatives, many diplomats, government official, and the media.

Addressing the gathering Ambassador King said: “We are here at the beginning of a new chapter for Lety. The stench of the pig farm is gone. But the memory of what happened here shall live on. The victims of Lety shall finally gain the dignity of a memorial that will be built here, for them. A place for quiet remembrance, but now also a place to teach the history and discuss the truth of what happened here. If we are to ensure that the horrors of the Holocaust are never repeated, we must ensure that what happened here is never forgotten!“

After years of negotiations, the government last year agreed with the farm’s owner on a buyout. The site is set to become a documentation and educational centre with a permanent exposition on the Romany Holocaust – the first institution of its kind in the Czech Republic.

The camp at Lety u Pisku was almost forgotten after World War II ended. A large pig farm was constructed near the site in the 1970s. In 1992, the book Black Silence by Paul Polansky brought the history of the camp back to light. President Vaclav Havel built a small memorial at the site in 1995, and fifteen years later, a renovated memorial was opened. Relocating the pig farm was debated for years.