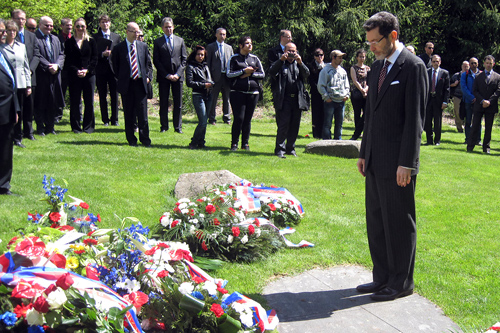 On this solemn occasion, Ambassador Eisen told the audience: “Those who were targeted for extermination by the Nazis — Roma, Jews, the LGBT community, and the disabled — are permanently intertwined in our remembrance and in our battle to ensure that this particular piece of history never repeats itself…”

Noting the presence of a pig farm near the memorial, he added: “I’m sorry to say, the pig farm is a symbol — a symbol of indifference.  And I believe that we should never underestimate the power of a symbol to affect the trajectory of our lives.” For remarks in full please click here.

The Nazis built the facility at Lety u Pisku to serve as a penal labor prison in 1940.  It became the “Gypsy concentration camp” in 1942. One thousand, three hundred and eight members of the Roma and Sinti communities were imprisoned here by 1943.  Another 327inmates were murdered at Lety u Pisku by this time; 500 more were transported to Auschwitz. Three hundred victims survived the war. A second concentration camp for Roma and Sinti from Moravia was established in Hodonin u Kunstatu.  According to some estimates, 90 percent of Roma and Sinti population who lived in the Nazi-ruled Protectorate of Bohemia and Moravia were exterminated there.

The camp at Lety u Pisku was almost forgotten after World War Two ended.  A large pig farm was constructed near the site in the 1970s.  In 1992, the book Black Silence by Paul Polansky brought the history of the camp back to light.  President Vaclav Havel built a small memorial at the site in 1995, and fifteen years later a renovated memorial was opened.  Relocating the pig farm that that neighbors Lety u Pisku continues to be debated.