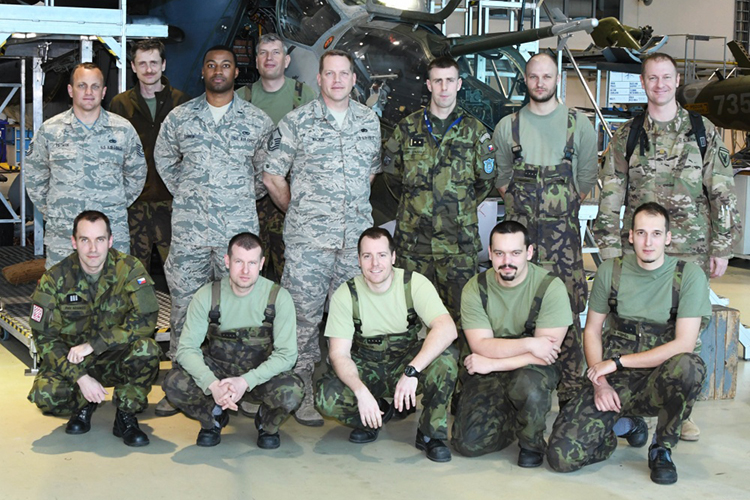 Airmen from Texas and Nebraska Air National Guard units partnered with the Czech Air Force to participate in a subject matter expert exchange of maintenance information March 20-23, 2017, at air bases in the Czech Republic.

“Having the ability to have Airmen from across multiple airframes share their experiences and best practices is something that the Czech Air Force really appreciated and valued,” said White. “You could see the dialog and discussion evolving with detailed questions. I was very happy with the level of information and the vast experience that the Airmen were able to share with their Czech partners.”

The state partnership program has been in place since 1993 with a multitude of military exchanges and familiarization over the course of its existence. However, it had been many years since a dedicated Air Force maintenance exchange had taken place.

The Airmen traveled to the three Czech Air Force bases, each with different aircraft, to discuss maintenance topics such as front shop, back shop and all levels of maintenance planning.

There have been multiple pilot exchanges, but never ones including maintenance or munitions. Both of these units are integral elements for mission success and were necessary additions for the benefit of the program.

The state partnership has been in place for over 24 years between the Czech Republic, the Texas National Guard and the Nebraska Air National Guard. Many military engagements have been conducted during this partnership, and with nearly 30 more exchanges covering the numerous mission sets within the military, planned this year, the states continue to build an enduring relationship with their Czech counterparts.