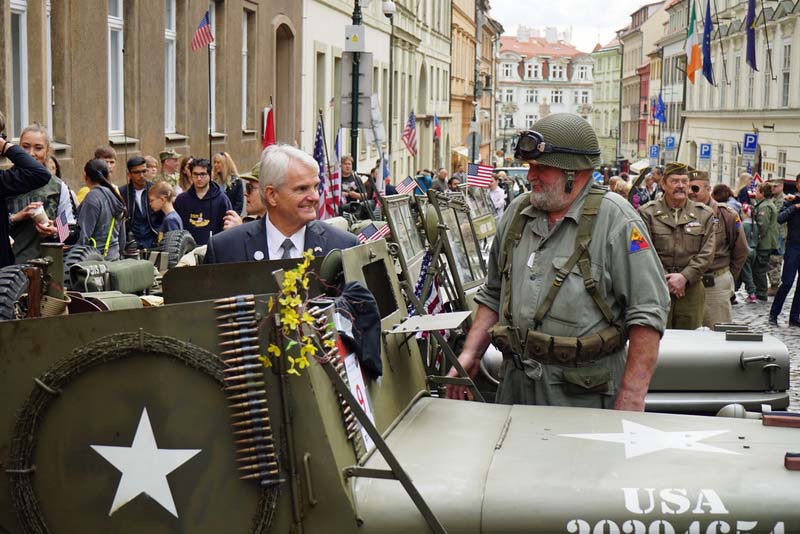 On the last Friday in April, the U.S. Embassy in Prague has traditionally hosted the launch of the Convoy of Liberty.  The Convoy is a magnificent tribute to the U.S. role in liberating Czechoslovakia from fascist dictatorship in 1945.  It honors the U.S., Czech, and other soldiers and civilians who brought freedom to Pilsen, Cheb, Strakonice, Rokycany, Domažlice, and so many other towns in southwest Bohemia in 1945.  The Convoy has been considered the start of the season of annual commemorations in towns throughout the region, culminating in the Festival of Freedom and a ceremony at the Thank You, America! memorial in Pilsen, which living veterans of General Patton’s Third Army proudly attend each year on May 6.

In 2020, the Coronavirus pandemic has required the postponement of these public commemorations and festivals, so we will recognize this important anniversary virtually.  The U.S. Embassy looks forward to honoring the 75th anniversary of the liberation of Pilsen and the region in 2021, and being proudly present at commemoration events for many, many years to come.

This year, to celebrate the end of World War II and the U.S. Army’s role in liberating Czechoslovakia in 1945, Ambassador Stephen King has recorded a message honoring those who sacrificed to end the war, both U.S. and Czech, and thanking the Convoy of Liberty and the many towns throughout southwest Bohemia who joyfully celebrate the U.S. role in bringing freedom to Czechoslovakia in 1945.  In addition, Embassy officials will send a personal video message to each municipality that had planned to host a commemoration this year.