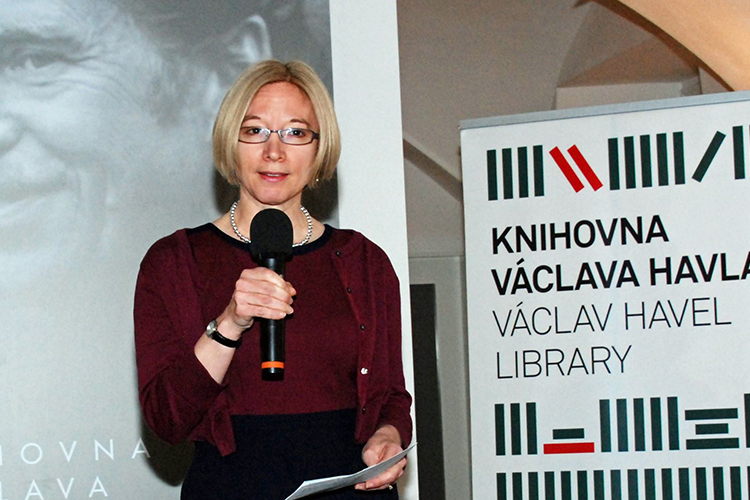 Kelly Adams-Smith opened a conference “Commemoration of the 70th Anniversary of the Marshall Plan” on May 26, 2017 in the Vaclav Havel Library.

Chargé d’Affaires Kelly Adams-Smith opened on May 26 a conference “Commemoration of the 70th Anniversary of the Marshall Plan”, dedicated to the historical significance of the Marshall Plan, which created a bridge across the Atlantic. As a part of the conference, the speakers at the conference also examined the current challenges to the transatlantic cooperation. The conference was well attended – there were around 60 participants, mostly from academic circles. The organizers recorded each of the sessions and will make it available to broader public.

The conference was open by Michal Zantovsky, director of the Vaclav Havel Library.

Europe was devastated by years of conflict during World War II. Millions of people had been killed or wounded. Industrial and residential centers in England, France, Germany, Italy, Poland, Belgium and elsewhere lay in ruins. Much of Europe was on the brink of famine as agricultural production had been disrupted by war. Transportation infrastructure was in shambles. The only major power in the world that was not significantly damaged was the United States.

From 1945 through 1947, the United States was already assisting European economic recovery with direct financial aid. Military assistance to Greece and Turkey was being given. The newly formed United Nations was providing humanitarian assistance. In January 1947, U. S. President Harry Truman appointed George Marshall, the architect of victory during WWII, to be Secretary of State. Writing in his diary on January 8, 1947, Truman said, “Marshall is the greatest man of World War II. He managed to get along with Roosevelt, the Congress, Churchill, the Navy and the Joint Chiefs of Staff and he made a grand record in China. When I asked him to [be] my special envoy to China, he merely said, ‘Yes, Mr. President I’ll go.’ No argument only patriotic action. And if any man was entitled to balk and ask for a rest, he was. We’ll have a real State Department now.”

In just a few months, State Department leadership under Marshall with expertise provided by George Kennan, William Clayton and others crafted the Marshall Plan concept, which George Marshall shared with the world in a speech on June 5, 1947 at Harvard. Officially known as the European Recovery Program (ERP), the Marshall Plan was intended to rebuild the economies and spirits of western Europe, primarily. Marshall was convinced the key to restoration of political stability lay in the revitalization of national economies. Further he saw political stability in Western Europe as a key to blunting the advances of communism in that region.

Sixteen nations, including Germany, became part of the program and shaped the assistance they required, state by state, with administrative and technical assistance provided through the Economic Cooperation Administration (ECA) of the United States. European nations received nearly $13 billion in aid, which initially resulted in shipments of food, staples, fuel and machinery from the United States and later resulted in investment in industrial capacity in Europe. Marshall Plan funding ended in 1951.

Marshall Plan nations were assisted greatly in their economic recovery. From 1948 through 1952 European economies grew at an unprecedented rate. Trade relations led to the formation of the North Atlantic alliance. Economic prosperity led by coal and steel industries helped to shape what we know now as the European Union.

Hoffman was president of the Studebaker automobile corporation when Truman appointed him head of the Economic Cooperation Administration, the agency that operated the Economic Recovery Program (ERP). He was chosen because Congress thought that the ERP could best be run by people with business and financial experience.

Hoffman was a first-rate manager whose tact, persuasiveness, and commitment to ERP goals proved to be valuable assets. Harriman, also an experienced businessman, held the second-most-important post, special representative to the countries participating in the Marshall Plan. Before becoming secretary of commerce in the Truman administration, he had served in two crucial posts during World War II, as Lend-Lease representative in Britain and then as U.S. ambassador to Moscow.

President Truman appointed him Secretary of State in 1947. The European economy was in shambles after World War II, and there was great political instability. Marshall believed that the United States' interests could be best served with an economically strong and stable Europe. In June of 1947, Marshall proposed a sweeping economic recovery program, later known as the Marshall Plan, which would remove trade barriers, modernize industry and make Europe prosperous again. The plan was a success, and in 1953, Marshall received the Nobel Peace Prize for his efforts.