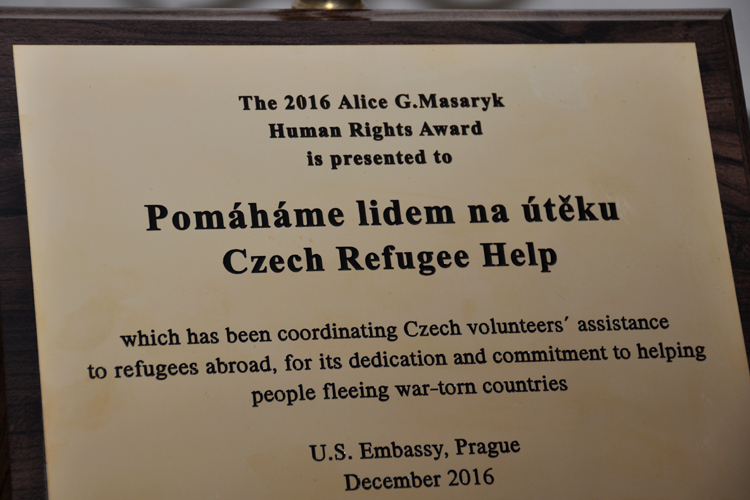 On the occasion of International Human Rights Day (December 10), U.S. Ambassador to the Czech Republic Andrew H. Schapiro presented on December 8 the Alice Garrigue Masaryk Award to Pomáháme lidem na útěku (The Czech Refugee Help or PLNU) organization which supports, helps, and coordinates Czech volunteers working along the Balkan refugee route. “The award was presented for the dedication of this organization, and its commitment to helping people fleeing war-torn countries,” said the Ambassador during the ceremony at his residence in Prague 6.

On behalf of hundreds of Czech volunteers, the award was received by Zuzana Lenhartová, founder and leader of the group; Dalimil Petrilák, a founding member responsible for media coverage of volunteer activities; Šárka Oplatková, a coordinator of psychological help for volunteers working with refugees; and Marie Heřmanová, the spokesperson and volunteer in Hungary, Serbia, and at the Prague Railway Station.

PLNU started as an informal initiative in September 2003, and since then, approximately 3,600 people have volunteered in the Balkans under PLNU support. The team has worked on the Croatian-Serbian border, on the island of Lesbos, and in the provisional camp in Idomeni, Greece. The coordination team of Czech Refugee Help consists of some ten volunteers, who coordinate all volunteers, material donations, and donation distribution in the Czech Republic and Serbia.

In 2004, the U.S. Embassy in Prague established the Alice Garrigue Masaryk Award to recognize persons and institutions in the Czech Republic who have made an exceptional and continuing contribution to the advancement of human rights in the country through the courageous promotion of social justice and defense of democratic liberties. The award is presented annually and is named in honor of Alice Garrigue Masaryk, prominent Czech-American humanitarian and founder of the Czechoslovak Red Cross, as a tribute to her devotion in combating social injustice and her personal courage in standing up for human rights. Alice G. Masaryk is among the great symbols of the history our two countries share, and exemplifies the Czech Republic’s long-standing commitment to human rights, including civic and political rights, at home and abroad.

The award is named for Alice Garrigue Masaryk, a pre-eminent Czech-American and founder of the Czechoslovak Red Cross. Alice G. Masaryk is among the great symbols of the interwoven history our two countries share. Her courage while unjustly imprisoned by the Austro-Hungarian Empire, her determination to achieve equal rights for women, and her stand against the Communist takeover of the country served as inspiration for her countrymen.