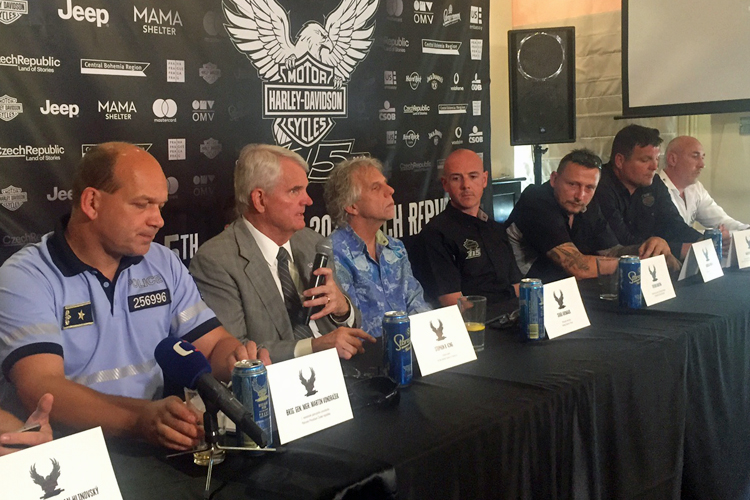 Ambassador Stephen King participated in Harley-Davidson’s press conference to highlight the upcoming 115th H-D anniversary festival to take place in Prague in July. The conference also launched the “Czech-American Challenge” smart-phone application that U.S. Embassy Prague developed in conjunction with Harley Davidson Prague , which features information on locations in the Czech Republic of importance in the U.S.-Czech relationship. The Embassy also co-organized a mini-film festival of iconic American motorcycle films.

Ambassador King remarked: “I would like to congratulate Harley-Davidson on this remarkable achievement – 115 years since the company’s founding in Milwaukee, Wisconsin by two young American entrepreneurs –William S. Harley and Arthur Davidson. The two founders are a wonderful example of American entrepreneurial spirit and drive – they had an idea, they launched it on a shoe-string budget, and then with ambition and ingenuity, they expanded to markets all over the world.”

With regard to the centennial, King said: “U.S. support for an independent Czechoslovak nation in 1918, the liberation of parts of Czechoslovakia during WWII, and our 100 years of close ties with the Czech people in the security, economic and cultural spheres have led many here to view the United States as a symbol of freedom. Likewise, Harley-Davidson riders are also associated with a symbol of freedom and the brand continues to convey an image of “All for Freedom” and “Freedom for All.”